My family is not one for much change. I say this because every year, almost every holiday, we have the exact same meal. While I always enjoy it, sometimes I like to switch it up. I'll make things that are not traditional for us. The first reaction is always a side-eye. My mom and/or my younger sister will try it first. Always. Based on their initial taste reaction, everyone else will maybe try it. Once they realize they like it, I always get asked to make it (hello corn pudding and tomato pie).  I remember one year we did breakfast for dinner and an hour later everyone was starving! I'm sure this has something to do with the reason they don't want to change things up!

This year, however, I made a few dishes that were to remain at my own home. Mainly because I knew we were going to the movies and I would not be in the mood to fix plates to go. So I made a turkey (using Alton Brown's recipe), pressure cooker collard greens, and something new I'm going to hold close to my chest, Seafood Dressing!

**A note on the turkey**
The turkey was good. I want it to be better though! The next time, I will brine it longer (I did about 12 hours) and I will add more seasonings to the bird itself. The flavor I was looking for wasn't there. It was moist and we ate it all, but it will be better the next time. I left the popup timer in the turkey, but I used a digital thermometer for a more accurate read. As you can see, the popup did NOT pop up. The turkey would have been dry by the time that happened. I didn't remove it because I didn't want to leave a hole for the juices to run out of. I also used a flat roasting rack so that the bird would cook evenly. This was about a 17 pounder. 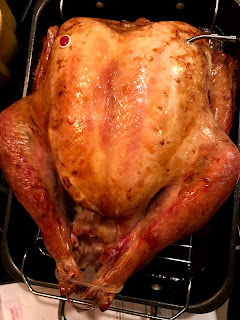 I've been wanting to make Oyster Dressing for a few years, but never have gotten around to making it. One of my sisters is allergic to anything that comes out of the ocean. And when I say allergic, I mean she can't even take the smell of it. This makes things tricky because the rest of us could probably live off seafood!

I dilly dallied around Pinterest looking for recipes until I came across one that I liked. I found this one:

I made some modifications.
1. The recipe only tells you what to do with 1 tablespoon of sugar. So I didn't add the additional tablespoon.
2. I used seafood stock because I had some, instead of chicken stock. I think this made a difference in the taste.
3. I think this recipe used imitation crab. I didn't want to use imitation crab, so I used canned crab. The problem here was that it was the consistency of corn meal! You could taste it, but you couldn't see it. I'd like to see it. The next time I'm going to have to splurge for some flaked crab.
4. I added scallops because I had some bay scallops in the freezer.
5. I call it dressing because stuffing (to me) goes inside the bird. This wasn't going anywhere near the bird.

It was delicious! I even tried it with some of my vanilla bourbon cranberry sauce and it was so good!
Everyone that tasted it wants the recipe, so I'm glad to finally have the post done so that I can share it with them! I think this is going to be my new "tradition" for the holidays! The pan size is a 9x13 "cake" pan.

Speaking of cranberry sauce...do you eat it? I love it! A few years ago I started eating the whole berry canned kind. I've never liked strictly jellied. Then someone told me how easy it was to make it at home and now I refuse to eat the canned (unless it's a situation where I can't find cranberries). You have got to try to make this from scratch! Even if it's not loaded with Bourbon!

Put your cranberries into a large pan, and pour in your sugar and water. Over med/high heat bring it to a rolling boil. Reduce to a simmer and add in your bourbon and vanilla.

Let simmer for 15-20 minutes or until its a nice jam like consistency. If you want it a little thicker boil longer, a little soupier boil a little less!

I've also made my sauce in a crockpot. You have to be careful of any cranberries trying to jump out of the pot.

What traditions do you and your family have? Do you ever seek to bring some change?