December 04, 2018
Baby Magic has lost her first tooth! It seems like it took forever! About a year ago the dentist told me the two bottom teeth were loosening. She was so excited to loose a tooth! The adult tooth is about halfway in already.

You would have thought the world ended and began all at the same time. The blood freaked her out, but she was so excited that the tooth fairy would be paying her a visit. We made sure to get all of the blood out of her mouth by rinsing with warm water and then a kid friendly, alcohol free mouthwash. Then we brushed the tooth. I used a little peroxide to get the blood off of it. Then we stuck it in a little tiny baggy and placed it in the tooth fairy pillow I made for her. I hung the pillow next to her bed so that I wouldn't wake her. 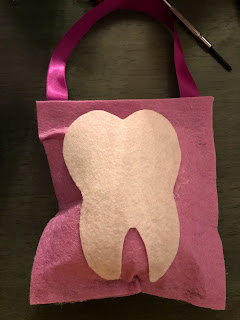 To make this, I used felt sheets, ribbons, cotton batting (for the stuffing) and a glue gun. It was simple enough to make. The top of the tooth is open so it serves as a pocket to hold the baggie with the tooth.

Once she was asleep, I removed the tooth and gave her a Tooth Receipt (I found the image on Google), $2 and 2 chocolate coins. She's obsessed with chocolate coins! When she woke up the next morning, she was so excited. Then she told me that she knows that I'm the tooth fairy and that I woke up in the middle of the night to sneak in her room. She also said that her grammy told her that the tooth fairy gives $10 for the first tooth. I told her to tell grammy she owes her $8 and played dumb about being the tooth fairy. At least I didn't lie, right? 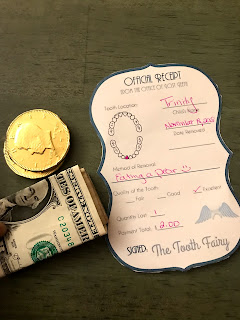 By the way, she totally knows this is my handwriting. As I was writing, I thought to myself "dang I should have typed this!"

I consider this a win overall though. It was fun, and I did not have to get up in the middle of the night. She goes to bed at 8pm. I went in at 9pm!

I have no idea what people do with baby teeth! I purchased a little tooth saver box on Amazon, but even with that I'm like what do I do with this? LOL Somebody give me some guidance!

What do you do with your children's teeth? Do you let them believe in the tooth fairy? Let me know, I'm interested! 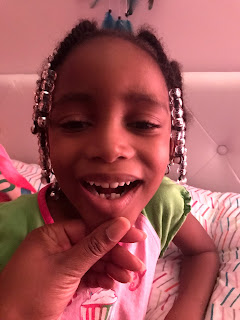