Baby Magic's kindergarten class is having a party today to celebrate Halloween. I had planned on having this post up earlier, in case anyone needed an idea for treats but hey, you can save it for next year. 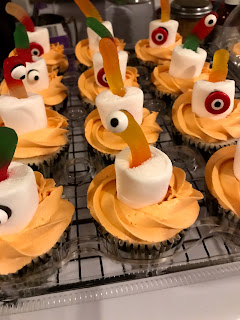 I signed up to bring the sweet treat. There are 26 kids in her class. Yep. 26. Such an odd number! Well, it's an even number but you know what I mean! I went back and forth about a few things I saw on Pinterest, but ultimately decided not to make them too spooky because, 5 year olds.

A quick tip, always read through any recipe you are planning to make before you even head to the store. Check your pantry/cupboard before you go to make sure you aren't buying something you already have (I'm bad at this). Plan ahead. If you can do any of the prep work beforehand, it will be a huge time saver.

I saved no time this go around. Baby Magic requested cake pops because that's what I made last year. Cake pops are SO time consuming and I wasn't in the mood. Maybe next year.

The cupcakes were easy enough to make. The time consuming part was the worms. I purchased a pack of jumbo marshmallows, a too big bag of gummy worms, and two different sets of candy eyes. I boiled some water and melted a few candy melts to stick the eyes on.

To begin, I cut the worms in half. The marshmallows were not as big as I thought they were, so each marshmallow only got a half of a worm. Using a butter knife dipped in hot water, I made a small cut in the top of the marshmallow and inserted the worm. The water makes the marshmallow adhere to the worm, so there is no need for candy melts there. I then used a toothpick to dab a little candy melt and stuck the eyes on. I placed the marshmallows in a covered container in the fridge to fully set while I made the cupcakes.

Place 1 marshmallow in the center of the cupcakes and DONE!

These are so cute and not so scary! 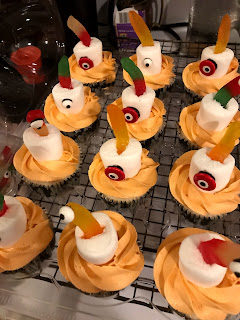