How was your Thanksgiving? I hope it was great! Did you eat too much? I didn't (surprisingly). I was actually shocked at how much I DIDN'T eat. We had a small breakfast and then my family's agreed upon time to eat dinner was 1pm. I think we started eating at 2:30...they can never be on time.

Anyway, I decided that I was not going to be a slave to the kitchen this year. I would prep as much as I could ahead of time and actually enjoy a holiday for once in my life. I kind of won at it. I say kind of it because I wasn't as prepared as I thought I was, but it worked out in the end.

I love love love turkey. Like for real LOVE. I had never roasted one though. I think it has always been the fear of messing it up. And if I buy a turkey and then mess it up, I would probably force myself to eat as much as I could and nobody has time for that. Well, this year, my mom gave me a small turkey. It looked like a slightly overgrown chicken. I found this recipe for a brined turkey on Carlsbad Cravings and decided to give it a try.

Now, I thought I had everything I needed, but I didn't. I didn't have the apple juice, so I added a few quartered apples to the brine. I reduced the salt because my turkey was previously frozen and I didn't want it to be too salty. Other than that, I followed the directions. I roasted my turkey in a turkey roaster and about half way through I realized that the lid wasn't all the way on it! The turkey turned out fine. It wasn't as browned as I wanted it to be, but it was delicious and full of flavor. Next time around though, I think I would season the actual bird a little more and cook it in the oven. I also did not have any twine to tie the legs together.

In addition to cooking the turkey for my house, I made chocolate chip cookies, a lemon sour cream pound cake, a rum cake, and homemade cranberry apple sauce. 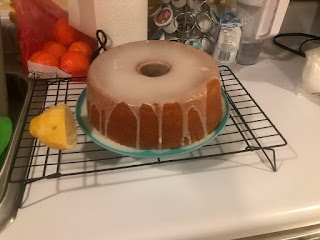 The recipe for the Lemon Sour Cream Pound Cake can be found here: http://www.plainchicken.com/2016/05/lemon-sour-cream-pound-cake_28.html 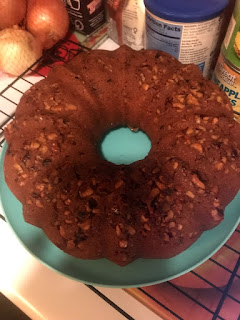 The recipe for the Rum Cake can be found here: http://allrecipes.com/recipe/17456/golden-rum-cake/


Once I was tired of eating leftovers, I made a nice soup out of the leftover turkey! I don't have a recipe for it (sorry)! I just winged it! It involved carrots, celery, onions, bell pepper, a can of cream of mushroom soup, chicken broth, seasonings, egg noodles and leftover turkey. 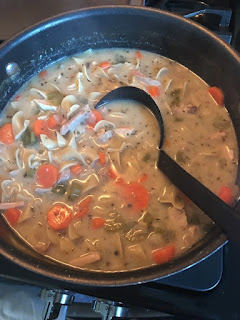 I hope the rest of 2017 is magical for you all! Season's Eatings!