April 14, 2016
Recipe videos have become very popular on Facebook. And guess what? I fall victim at least every other week. Normally I don't have a chance to take pictures during the process of preparing...but last night I at least managed to get pictures while it was cooking and before hungry hands dug in!

I saw this recipe from Tasty for Fajita Stuffed Chicken. Who wouldn't want to try that? Even without the video I think the name alone would have been enough to make me want to try it. So I watched the video a few times, made my grocery list and made it for dinner.

I made the recipe with 6 chicken breasts of different sizes. Using the measurements given, I still had extra cheese/veggies. BUT I also am challenged at properly cutting a "pocket" for the stuffing LOL. So some had more stuffing than others. 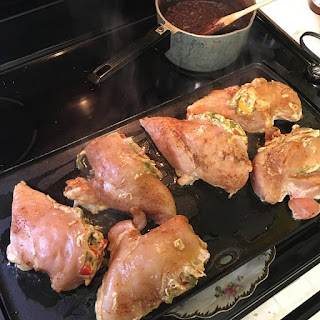 I sauteed the veggies in a skillet as the recipe states, but because I didn't feel like standing over the stove too long, I used an electric griddle to cook all the chicken breasts at once. 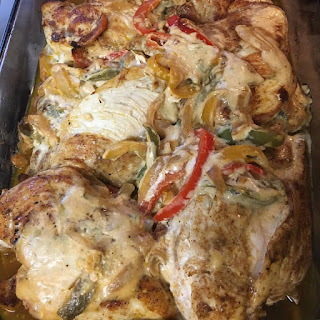 It was messy, but it was delicious! It was juicy and flavorful. The peppers and onions were my favorite part. I also used low fat cream cheese and a low fat Mexican cheese blend (purchased from Aldi) instead of full fat cheese. I served it with brown rice and black beans. We ate it LOL.

Here is the recipe and instructions from Buzzfeed.

Heat the canola oil in a pan over high heat. Cook the peppers, onion, salt, and pepper until soft and slightly caramelized. Transfer the cooked veggies to a bowl.In the same bowl, mix in the cream cheese, cheddar, and pepper jack, stirring until evenly incorporated. Set aside.
In a separate bowl, combine the chicken with the salt, chili powder, cumin, and garlic powder, evenly distributing the spices over the chicken.
On a cutting board, slice a pocket in the chicken horizontally and fill the pocket with a heaping spoonful of the veggie mixture. Press the edges of the chicken together to seal in the filling. Repeat with the remaining chicken.
Heat the canola oil in a pan over medium heat. Cook the stuffed chicken for five minutes on each side, until cheese is melted and chicken is cooked through.Serve with salsa, sour cream, and guacamole!