Christmas and the Cranks

I pray that 2014 brings bountiful love and blessings your way!

Here is a little rundown of Baby Magic's First Christmas. It was disastrous, but I am glad we made it through! My supervisor talked me into taking the week of Christmas off. I was hesitant to do so because I don't have much leave time and you never know what will happen.

As it happens, I said what the heck and decided to spend the cherished time with my little one. And my sister and brother in law flew in from Houston and that gave me more time with them...or so I thought. On Monday, Baby Magic started this little cough. Not enough for me to worry too much but I knew she was coming down with something. And as many of you may know (or not), there ain't a thing you can do or give a baby that's sick! By Christmas, my noodle was feverish and coughing so bad that she wouldn't keep her milk down. By Christmas night, we were at the ER. They did nothing. Told me to give her Tylenol for the fever and continue everything else I was doing...cool mist humidifier, saline and suction, keep her elevated and give her smaller doses of milk interchanging with Pedialyte.

24 hours later her fever was higher and she was refusing to eat. On top of that she was now wheezing so bad it woke me up. Back to the ER we go. This time they gave her a chest XRay, a dose of Tylenol and they suctioned some of the thickest mucous I have ever seen out of her. There was no way I was going to be able to get that out with a bulb syringe. No way. The ER doctor told me she had RSV and if I bought her back they would admit her. But they didn't check her for RSV...apparently that test is administered by something being stuck up her nose.They gave me instructions to make sure she saw her Pediatrician that day (Friday). It took hell and high water to get her in, but we did. She was then prescribed albuterol and given another appointment for Monday (the day I was scheduled to return to work). By Saturday, guess what? I was sick. How on earth was I supposed to take care of me and baby?! I was miserable, she was miserable and we just stayed in bed for two days. Monday's appointment came and she was doing better but told to come back Friday. Leaving her doctor, I started coughing so hard that I gave myself an asthma attack. Blah.

I had already packed the car with everything she would need for a week in hopes to send her to her grandparents so that we could both recover and not reinfect one another. I didn't however, expect to be staying off of work. But I had to. I could barely breathe or talk. So I've spent all week without my little noodle and it sucks! I'm feeling a little better, but I'm back at work...no choice. I can't afford to work without pay.

I thank God that neither of us have a serious illness. I hope that everyone that has been dealing with the cooties gets over the nasties quickly. Thank you to everyone that came to my aid or offered to come to my aid! You are much appreciated!

If you follow me on Facebook you know that my family decided to do appetizers for Christmas dinner instead of a traditional meal. Here are the dishes that I made:

In a large bowl, mix everything EXCEPT fillo shells
Fill shells with the mixture...don't fill too much. You want to ensure all shells have some filling
Bake at 350 for 15-20 minutes

Now, I was worried about this recipe because I am NOT a fan of mayonnaise. But you can't even taste it after it's cooked! This was a hit and I had to stop myself from eating them all before everyone arrived. I will definitely hold on to this recipe. It doesn't get any easier or tastier than this! 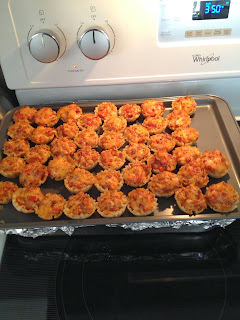 Excuse the pictures! I was trying to cook and keep Baby Magic content at the same time! This picture doesn't do them justice, but try them and you'll love them!

I also made the Honey Baked Ham Knockoff and served it with Hawaiian Rolls. I made some green chile and jalapeno roll-ups that were unremarkable. So when I have a moment to try that recipe again, I'll blog about it. I made two tomato pies and a broccoli casserole.

The menu didn't stick to appetizers...we had chicken wings, potato salad, spinach dip, dirty rice, fried wontons, cupcakes, cookies, and dressing. It was an interesting meal to say the least! But the family was happy to come together, although Trinity wasn't really in the mood. I managed to get a picture of her before she started throwing up on everything...she eventually ended up in jammies.


Wishing you and your family a very happy and healthy New Year!!
XOXO
RoJo