Thanksgiving with the Joneses 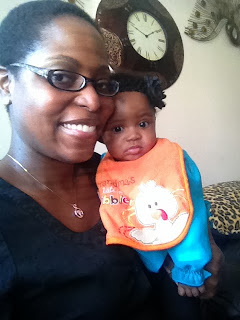 My oldest (eldest?) sister on my mother's side suggested that we take a break for one of the holidays because we don't often spend time with our other families. At the time, everyone agreed for the sake of shutting her up. So I was determined to cook my own Thanksgiving dinner at my house and tell everybody if they wanted to visit with us they were most welcomed to. Well, that didn't happen. My mom felt neglected, another sister said she had nowhere to go and so we all ended up eating at my mom's house anyway. But I totally could have handled an entire dinner. Really, all I was missing was a turkey and a few more sides lol.

We had our usual spread of turkey, ham, dressing and the like. I usually try to make something different as an opportunity to test out new recipes. This year was no different. I assigned myself the ham, corn casserole, sweet potato casserole and I wanted to make a cake. I ended up making two hams (both for my mom's house), two corn casseroles (one for mom's and one for dad's), and one sweet potato casserole for mom's. Then I made a caramel cake for dad's. I was busy! Luckily my little lady bug was either sleep or watching Mike the Knight on Nick Jr. and I was able to get all of this done.

I have never cooked a ham. I was nervous. Anyone that has ever eaten dinner with us knows that there are usually 3-4 meats. My family takes meat serious! So just to be on the safe side, I cooked my own spiral ham and another ham that I got out of my mom's deep freezer. Luckily both were tasty! I found all the recipes on Pinterest, but I modified some of them slightly. I didn't like the corn casserole recipe so I won't be sharing that one!

The first was a Honey Baked Ham knockoff recipe. It. Was. The. Truth. I had to stop myself from eating it all up! I'm not kidding! And it was BEYOND EASY!! The recipe called for it to cook in the crockpot. I cooked it on the stove since I was already in the kitchen.

Recipe from Lady With The Red Rocker

1 bone-in spiral sliced pre-cooked ham (un-sliced also works)
2 cups white granulated sugar
1 teaspoon onion powder
1 teaspoon cinnamon
1 teaspoon nutmeg (freshly ground if possible)
1/2 teaspoon ground ginger
1/2 teaspoon ground clove
1/2 teaspoon paprika
2 to 4 Tablespoons water
Score outside of ham into diamond shapes and place in crock-pot. Add about 2 cups of water to bottom of pot. Heat on high for about 3 hours until heated through.
Combine the rest of the ingredients in a sauce pan. Add enough water until you get a thick syrup (about 2 to 4 Tablespoons). Bring the syrup to a boil on the stove top. Boil for 1 minute.  Remove from heat.
Remove ham from crock-pot and place in a foil lined baking pan. Baste ham with syrup. Place ham in oven and broil at 500° for 1 to 3 minutes until syrup starts to bubble. Keep an eye on the ham while it is in the oven. Do not leave ham in oven unattended as it will burn quickly! Remove ham from oven and serve.
Next was the Coca-Cola ham. I found a bunch of different recipes and basically made up my own from those I found. 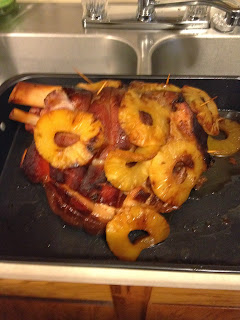 Wash ham in cool water.
Score ham skin in diamond pattern
In a large pot, place ham in and cover with water.
Boil ham for about 3 hours then remove
Heat oven to 325
In a heavy roaster pan, place ham inside of an oven bag (to avoid mess)
Pour in Coca-Cola
Massage ham with brown sugar. (Do it in this order so the cola won't wash off the sugar)
With toothpicks, place the pineapple rings on the ham
Bake for about an hour and 15 minutes.
Let the ham rest for a few minutes after baking. Remove the toothpicks so no one accidentally bites one! Enjoy!

The next recipe comes from The Slow Roasted Italian and is possibly the best Sweet Potato Casserole I have ever had. Maybe I was just super hungry?! NOPE it was good! 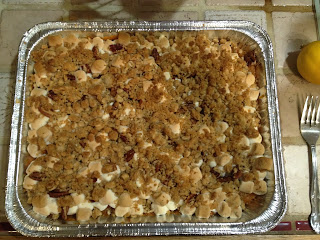 (I added a cup of toasted pecans to the topping)


Finally came a sweet surprise. I have been promising my stepmother that I would make her a cake for the longest. She's been such a sweetheart and such a big support to me since I had Trinity. So I told her for Thanksgiving I was going to make her a cake. I was emotionally drained the week of Thanksgiving and my mom gave me a pass on making sweets for her house. I was tired by the time I finished all the other dishes on that Wednesday night. But true to our schedule, Trinity and I were up at 5am so I decided to go on and make the cake. I'm glad I did! I thought it was going to be too sweet with the caramel flavor in the cake and the caramel icing but it really wasn't! I will be holding on to this recipe! 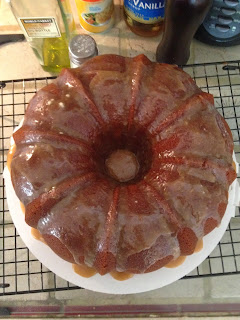 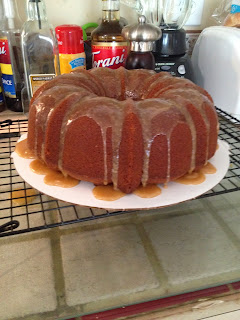 This recipe comes from Southern Bite

For the cake:
Preheat the oven to 325 degrees F. Cream the butter and sugar together. Gradually add the eggs and mix to combine.
In another bowl, stir together the all-purpose flour, baking powder, and salt.
Add the flour mixture and whipping cream to the batter by alternating the wet and dry ingredients until everything is combined. Mix in the vanilla extract. Pour into a greased and floured Bundt pan and cook for 1 hour and 20 minutes to 1 hour and 30 minutes or until a toothpick inserted into the cake comes out clean. Allow to cool in the pan for 5 to 10 minutes, then turn the cake out onto a cooling wrack and drizzle with caramel icing.

For the icing:
Combine the brown sugar, butter, and whipping cream in a small pot. Heat until boiling. Boil for 2 and half minutes stirring constantly. Remove from the heat and stir in the vanilla extract and powdered sugar. Drizzle while hot over the warm cake.
Instructions
Notes
If your caramel icing gets too thick or cools too quickly making it hard to pour, simply stir in a little whipping cream to thin it out some.

There are my little tidbits that will quite possibly make it to the Christmas menu as well! I hope you have enjoyed these recipes and be sure to let me know if you try them!