Chocolate Makes the World Go Round

September 21, 2013
Last month, my friend Tiffany had a mild obsession with cupcakes from this local bakery. It didn't help that for the month of August they had a special... $1 cupcakes. I hate to think how many she ate! This in turn caused a few of us to gain a mild obsession. And led to Tamiko ordering their cupcakes for her birthday, which was Labor Day weekend.

A favorite of mine is their Sour Cream Cupcake. It is so moist and yummy! They also have a really good Red Velvet...which I found out after demolishing it that they use coconut (and I'm allergic). My first time seeing coconut used in Red Velvet. But it is good. I just can't deal with the itchy mouth and throat afterwards!

Not being one to believe in spending money on something I can make myself, I decided that for my mom's birthday that I would attempt to make a Sour Cream Cupcake of my own. Of the Chocolate variety...this is Chocolate Kisses after all! :-) 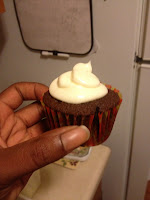 I searched until I found one that didn't have too many crazy ingredients. I didn't want to buy something that I wouldn't use again. I came across this recipe on Pinterest and it seemed simple enough and I had all the ingredients already...everything except the Sour Cream LOL! The recipe comes from http://www.spoonfulblog.com/2006/07/chocolate-sour-cream-cupcakes-with.html and I will definitely make it again! I can't give a review of the frosting because Baby Magic wouldn't let me make frosting...luckily I had some in the fridge left over from a batch of Red Velvet!


My oven sucks (I hope to buy a new one soon) so I have to adjust my temperature...thank goodness for oven thermometers! I think the offness of my oven temp affected the rise of the cupcakes. They were flat, but still yummy! 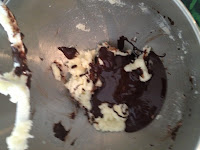 Make these cupcakes! You won't be disappointed. They melt in your mouth! My mom was happy that I chose these for her dessert. For dinner we made lasagna, salad and rolls. For the lasagna recipe, click HERE. Again, MAKE THESE CUPCAKES!!! 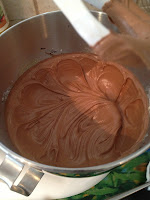 
(Makes enough batter for 18 regular cupcakes, 12 extra-large cupcakes, or 60 mini cupcakes. I could also see using this for a traditional sheet cake)

Put the chocolate in a heatproof bowl or the top of a double boiler and place it over, but not touching, a saucepan of barely simmering water (or the bottom of the double boiler). Stir until the chocolate is melted and smooth. Remove from the water and set aside to cool slightly.

Sift the flour, baking soda, baking powder, and salt into a medium bowl and set aside.

In a large bowl, using an electric mixer on medium speed, beat the butter and sugar until smoothly blended and creamy, about 2 minutes. Stop the mixer and scrape the sides of the bowl as needed during mixing. On low speed, mix in the melted chocolate. On medium speed, add the eggs one at a time, mixing until each is blended into the batter. Add the vanilla and beat until the mixture looks creamy and the color has lightened slightly, about 1 minute. Mix in the sour cream until no white streaks remain. On low speed, add half of the flour mixture mixing just to incorporate it. Mix in the water. Mix in the remaining flour mixture until it is incorporated and the batter looks smooth. The batter is ready to bake, or for additions such as nuts, fruit, chocolate chips, or other flavorings.

Bake cupcakes at 350 for approximately 20 minutes. 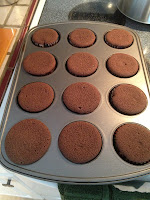 ½ cup (1 stick) unsalted butter, at room temperature
3 cups powdered sugar
1 teaspoon vanilla extract
3 to 4 tablespoons whole milk (I used skim because that’s what we had and that was fine)

In a large bowl, using an electric mixer on low speed, beat the butter, powdered sugar, and vanilla together with 3 tablespoons milk, then add up to 1 tablespoon more milk if needed to form a creamy, smooth, spreadable frosting. Use a small metal spatula to spread about 2 ½ tablespoons of frosting over the top of each cupcake. Decorate as desired.

The cupcakes can be covered and stored at room temperature for up to 2 days.

Let me know if you make them!
Kisses!
RoJo