April 17, 2013
This doesn't happen to me much, but it does happen from time to time and I am woman enough to admit when things just don't go right. I am a lover of almost all things pasta. But this right here...it just wasn't right. I'm actually upset that I wasted a really good jar of Bertolli sauce. Not to mention the other ingredients.

As it stands, I love Pinterest. I think it is one of the greatest sites ever invented and falls somewhere under Google. If I have just an itch of a thought about a recipe, 9 times out of 10 I can find it on Pinterest. So, I wanted a baked spaghetti, but not the traditional kind...something...different. I came across this recipe and was so excited because it was so simple and I seriously had all of the ingredients on hand. Double plus, right? Wrong.

Along with being simple, it didn't take much time. Which is always good for me, as long as it tastes good. I found this recipe for Baked Cream Cheese Spaghetti Casserole. Doesn't that title just make it sound yummy?

I gathered my ingredients and set to work. I substituted the ground beef for ground turkey (as I usually do). And I used whole grain noodles. 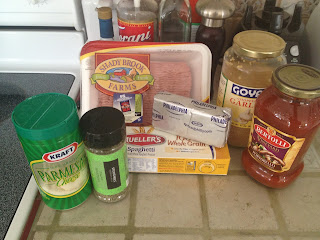 And followed the instructions TO THE T! 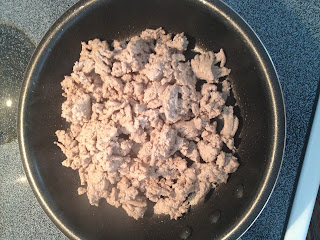 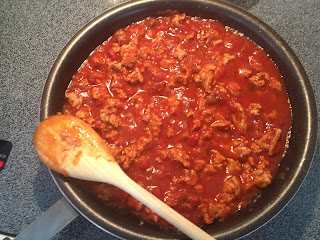 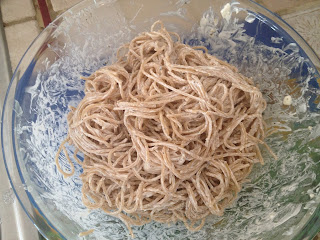 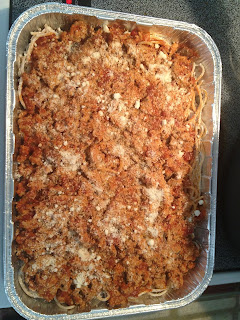 I really did do what it said. When it was done, it smelled and looked pretty tasty. I couldn't just eat it right then because I had to leave for work. So lunch it became. Maybe it's one of those dishes that you just have to eat as soon as it's cooked? Nah I don't think that was it. It wasn't enough sauce permeating the noodles for me. The cream cheese and spices gave it good flavor, but once you ate through the layer of sauce, who just wants to eat noodles? Not me. 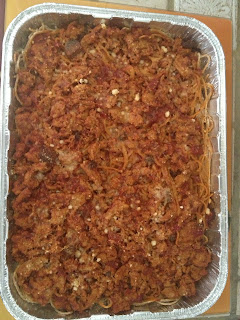 But I'm going to give you this recipe anyway, because you might like it. If you make it and don't like it, don't blame me because I told you! It looked nothing like the picture that was on the recipe! I think she did something different and didn't tell us! LOL Now I have to figure out what to do with the rest of the pan...maybe I'll make some more sauce and mix it all up. I am not about that wasting food life!

In a skillet, brown the ground beef until cooked through; drain fat and stir in spaghetti sauce.  Set aside.

Cook spaghetti according to directions on packet.  Drain and place cooked spaghetti in bowl.  Add cream cheese, Italian Seasoning and minced garlic.  Stir until cream cheese is melted and the spaghetti is thoroughly coated.

Lightly grease a 9x13" pan.  Spread a small amount of meat sauce in the bottom of the dish.  Put spaghetti on top of sauce and top with remaining meat sauce.  Sprinkle parmesan cheese on top.

Bake for 30 minutes, until bubbly.