Or maybe I am!

Have you ever had a holiday that you just wanted to spend ALONE? Well, that was me New Year's Eve. Oh, Happy New Year!

I wasn't sad or depressed - as my mom suggested I must have been to not want to spend it with family. I'm usually in church, but sometimes I party. This year --or last year-- I was exhausted and just wanted to stay home. My mom's boo wanted otherwise. Apparently every year he has a little drop in so that he can see all of his loved ones.

This year I just was not in the mood. For anything. But of course I got guilt tripped into coming out. So to my mom's house I went, with the bestie Miko in tow. It was also requested that I bring a dish. Specifically, a cheese ball. I'm no stranger to cheese balls and they are fairly easy to make so I complied. But instead of just doing the basic ham and pineapple like I usually do, I wanted to jazz it up a bit. This was a new year after all :).

So off to Pinterest I went in search of the perfect recipe. I didn't know how this was going to go, but my family are the best guinea pigs EVER! Most of them will eat almost anything and the rest will sample a bite at least.

So I found this recipe...and you guys know I love all things BACON so this was right up my alley. Needless to say it was a hit! I added a half block extra of cream cheese though because the ball seemed small compared to the pineapple and ham (which I also made). But this bacon ball was the star of the show. The extra cream cheese is the only modification I made and it didn't affect the flavor at all. In addition to the extra cream cheese, I also substituted the Worcestershire for soy sauce because that's what was in my pantry.

Cheese balls are extremely quick and easy to throw together and are great appetizers. We served them with Ritz Crackers, but any cracker will do (other than saltines).

Cook the bacon in a large skillet set over medium heat until crispy. Transfer to a paper towel-lined plate. Allow to cool slightly, then crumble and divide in half. While the bacon is cooking, preheat oven to 350 F. Spread the pecans on a baking sheet and toast for 5-7 minutes, or until fragrant. In a medium bowl, stir together the cream cheese, cheddar cheese, parsley, garlic, cumin, cayenne, lime juice, Worcestershire sauce, half of the minced jalapeños, and half of the crumbled bacon until well combined. Season the mixture to taste with salt. On a large plate, stir the toasted pecans, remaining minced jalapeños and remaining half of the crumbled bacon together until evenly distributed. Shape the cream cheese mixture into a ball (the mixture will be sticky, I found it easiest to shape if I just barely wet my hands first). Roll the ball in the pecan mixture until coated on all sides. Cover the ball and refrigerate for at least an hour before serving.

Everybody loved this! But I think my family has a slight addiction to anything with cheese! I also made the pineapple and ham cheese ball. Again, don't judge me because I used a paper plate! The struggle is real and I don't really know where my party platters are! And I didn't have to worry about cleanup! 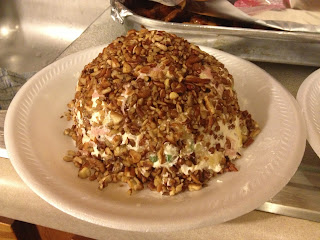 Combine all ingredients together.Mash into a ball and chill.Roll in crushed pecans.Refrigerate until served. Serve with crackers.

I told you they were easy! Have you ever made any cheese balls? If so, would you mind sharing your recipe? I'm always looking for something new to try!