Wishing you and your family a Happy Holiday Season (again)!

Hi folks! I hope this post reaches you in the best of health and spirits! How have your holidays been so far? What have you been eating? I'm dying to know! Seriously I am!

I, myself, --like who else could I be...anywho LOL! Have been smelling all kinds of wonderful food and have not been able to eat much. I think my senses are on overload so that I can't over-indulge but I am not mad at that!

We decided not to have a traditional Christmas dinner because we had just eaten all of that stuff for Thanksgiving. So it was last minute and very sporadic...and not at all cohesive, but everyone seemed to enjoy it! I can't tell you what all we had because honestly I don't remember. On my plate was buffalo chicken dip, wontons, tomato pie and chicken and potato casserole. The latter two are dishes I found on Pinterest and will share the recipes with you.

My day started out in a bummed out state because as usual, I woke up home alone with no one to eat breakfast or drink tea with. But it picked up as soon as I started cooking because I got excited! Oh come on, you know food makes you happy too!

My sisters took the liberty of planning the menu without letting me know. So two days before Christmas everybody was asking "What are you going to bring?" My first response was "NOTHING!" I seriously did not feel like cooking a single thing. I would have been fine to just bring the tea and lemonade. But I never get off that easy. Never.

So I told them not to ask me any questions and that they would just have to eat whatever I showed up with. Of course this got a lot of eye-rolls and teeth sucking but who cares! LOL I love giving my sisters a hard time because they get mad at everything and then try to turn it around like I am the meanest person on the planet...and sometimes I am.

I went back and forth through my Food Mood Pinterest board and had a hard time thinking of something to make. I wanted to make something that I knew would be yummy, but something that they had never had before. I first decided on Ro-Tel it on the mountain cups but changed my mind. After going back and forth for a while, I decided on Tomato Pie and Chicken and Potato Casserole. Then I wanted to do Mudhen bars and Paula Dean's banana pudding. I actually went to the store and purchased the ingredients for everything. Then my mom called Christmas morning and said "DON'T YOU BRING ANY DESSERTS!" What choice did I have other than comply? So I stuck to the tomato pie and the casserole.

I have made tomato pie in the past and I quickly learned that it is a recipe that I have to make my own. Mainly because most recipes require the use of mayonnaise and I. Do. Not. Like. Mayo. So I found this recipe and tweaked it, although she had already substituted the mayo for Greek Yogurt. I did not buy fresh basil because it didn't look good in the store and I had dried at home. I caramelized the onions and added bacon. Yummy bacon. I also doubled it so that I could take one to my dad's house and one to my sister's house.

I know you hear "Tomato Pie" and think YUCK...but this is a savory pie, not a sweet pie! I almost took my dad's back because of the face he made when I told him what it was! I was offended! Then he ate a slice to soothe me. He said he liked it but who knows! LOL My uncle kept saying it's a tomato quiche! And I said NO it doesn't have any eggs...the fighting went on until everybody tasted it, liked it, and shut up.

DIRECTIONS:
Preheat your oven to 350 degrees.

While your pie shell is cooking slice tomatoes thinly and layer in a colander in your sink. Sprinkle with salt and allow to drain while your shell is cooking. You can also dab the tomatoes with a paper towel to get some of the excess water off of them. This is an important step because if you do not get most of the liquid out the bottom of your pie it will be soggy.

By now your pie plate should be removed from the oven. Allow it to cool for a little while while you make the topping. Combine the two cheeses and yogurt in a medium bowl 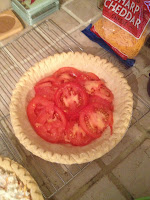 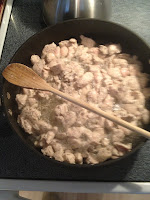 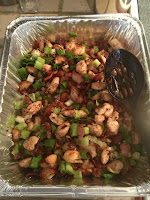 Have you ever made any of these recipes? If so I would love to know how you liked/didn't like them! Happy Holidays and Seasons Eatings!!

Now, is anyone on the NE side of Columbia interested in walking with me? :-)