July 16, 2012
Last week, the week after the Fourth of July, I had a serious hankering for some ribs. And guess what? All of the BBQ places were on vacation! I felt betrayed and my feelings were really hurt. So I went on a hunt to find  a recipe so I could cook my own ribs. And I found one. "Smack Yo Mama Ribs" to be precise. Who could resist a recipe with a name like that?! Well her title for them is actually "Smack Yo Mama Finger Lickin Grand Marnier BBQ Pork Ribs." What a name!

I've cooked ribs at home before, but never do they turn out like restaurant ribs. And given the fact that snakes are in love with my neighborhood right now, I'm not cooking on the grill. Matter of fact, I'm not even going in the backyard! So this was perfect!

I didn't have a chance to try out the recipe last week, but I made the ribs yesterday for dinner. Let me tell you...I would never dream of slapping my mom...well maybe I would dream of it but I would never actually do it! LMBO!

So, I went out to gather the ingredients on Saturday. The sauce is a Grand Marnier sauce and I've never purchased the stuff. I went into the "Red Dot" to get some but quickly changed my mind. I wasn't paying 28 bucks for something I only needed 2 tablespoons of...AND I wasn't sure if I was even going to like the sauce. So I stood in the store pouting for a moment and then I realized that they had the mini bottle (YAY)! That was still over $4 and I wasn't particularly happy about spending that on such a small bottle but that was better than $28.

The recipe called for the ribs to be brined. I started the process before I left for church. There weren't any measurements so I just dumped some salt and chopped garlic in the water. I then wrapped the pan in plastic wrap then aluminum foil and left it on the counter to get it's brine on. 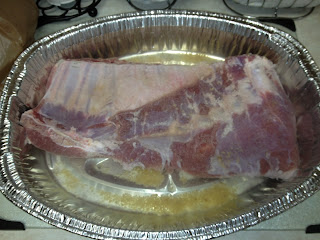 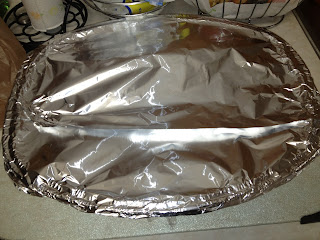 When I got home from church, all I smelled was garlic. This had me a little nervous...but not to worry. So then I proceeded to remove the membrane and chop the ribs into sections. I decided the sections were too long and I wasn't sure if anyone would pop over for dinner so I cut them in half...the ones without a big bone. And proceeded with the instructions to season. If you are going to use the same pan that you used for brining, be sure to rinse it out well to get the salt and garlic residue out. 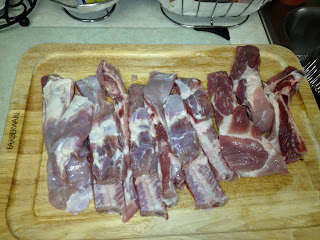 Then comes the sauce...just put it all in a saucepan on high heat then reduce the heat...this is some crazy good barbecue sauce!! 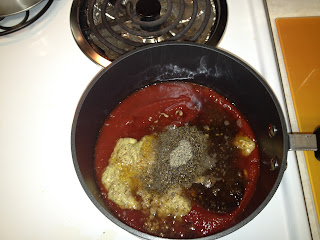 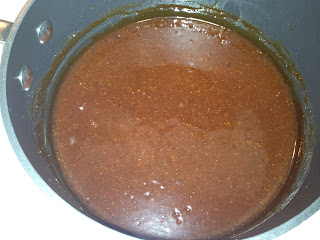 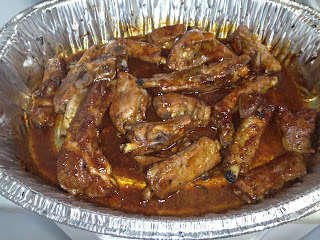 I drained off some of the liquid before I basted with the sauce. I just wanted the sauce flavor to be super concentrated. The author of this recipe didn't mention doing so, but that's what worked for me. Tender, yummy ribs. Shout out to Tamiko for letting me borrow honey so I didn't have to go to the grocery store. Call me later so you can come get your plate!

I'm a big fan of ribs. Wet, dry rub, just grilled...any way that are tender and tasty. These were tender and very tasty! I think you should try them out! And invite me to dinner!!!

This sauce would seriously be divine on ANYTHING!!! And yes you will lick your fingers...I suggest having some wet naps readily available! I served my ribs with wild rice, lima beans, and mac and cheese...all equally yummy! I definitely should have just splurged on the big bottle of Grand Marnier because this sauce is gonna be in my life forever now! 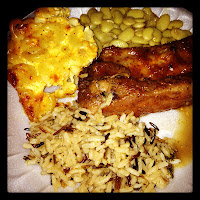 So to Utokia Langly of www.shesgotflavor.com, I thank the heavens for you and this recipe!!!