May 16, 2012
Have you ever heard that saying, "Everything happens for a reason and some people come for a season?" This was always my mom's response when I had a bad breakup, or something didn't go the way I thought it should have gone. Now that I'm older I can totally appreciate that saying! Somethings are not meant (or built) to last forever and when it is time to go, we have to have the strength to let it go. That may be a relationship, a car, a bad habit...or not so bad habit.

I recently had a situation where I was on a roll and moving speedily to get some things done and for whatever reason, God slowed me down. At first I said "why me Lord?" but then I had to remind myself that things don't happen because I want them to happen, they happen in the order that God has set them to happen. So...I had to take that particular situation in stride. Maybe you will hear about it sometime in the future (wink).

I was preparing for Mother's Day and there didn't seem to be enough hours in the days. My mom told me to just make one cake for dessert and bring some corn on the cob for dinner because I was seriously in a time crunch. Of course I listened...kinda. She called me later and said my aunt gave her a huge can of corn and she would cook that so don't bring any corn. Ok.

But I was still uncertain about exactly what I would make for dessert. I had just made that Cream Cheese Pound Cake that everyone was so fond of. She wanted me to make another but I said no. I wanted to try something different. My first thought was to make the Red Velvet Cheesecake again, but I didn't have enough time. So off to Google I went. My family loves Banana Pudding and my family loves Cheesecake. so when I came across the recipe for Banana Pudding Cheesecake I knew it would be a hit. And it was. 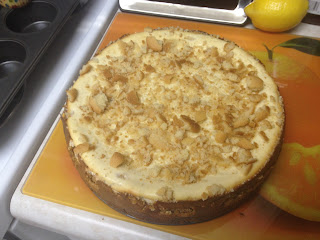 Southern Living Magazine, March 2012
1. Preheat oven to 350°. Stir together first 3 ingredients in a small bowl until well blended. Press mixture onto bottom of a greased and floured 9-inch spring form pan. Stand 17 vanilla wafers around edge of pan (rounded sides against pan), pressing gently into crust to secure. Bake 10 minutes. Cool completely on a wire rack (about 30 minutes).
2. Combine bananas and lemon juice in a small saucepan. Stir in brown sugar. Cook over medium-high heat, stirring constantly, 1 minute or just until sugar has dissolved.
3. Beat cream cheese at medium speed with an electric mixer 3 minutes or until smooth. Gradually add granulated sugar, beating until blended. Add eggs, 1 at a time, beating just until yellow disappears after each addition. Beat in vanilla. Gently stir banana mixture into cream cheese mixture. Pour batter into prepared crust.
4. Bake at 350° for 45 to 55 minutes or until center is almost set. Remove cheesecake from oven; gently run a knife around edge of cheesecake to loosen. Sprinkle top of cheesecake with coarsely crushed wafers. Cool completely on a wire rack (about 1 hour). Cover and chill 8 hours.


Let me tell you, the crust on this cheesecake is so freaking good! I think it will be the crust for all of my future cheesecakes to come! At first it didn't seem like the banana mixture was going to be enough to flavor the entire cheesecake, but it was. Just follow the directions and don't do your own thing...like I started to-but didn't. It is yummy and didn't last long enough for me to truly savor it LOL.
I also made a batch of Raspberry Lemonade cupcakes, which were not the cutest...but from what I hear they were tasty. I made them with one eye open and only half of my brain working (half sleep) and I didn't get to taste them. So the next time I make them I will be sure to give the recipe and instructions. 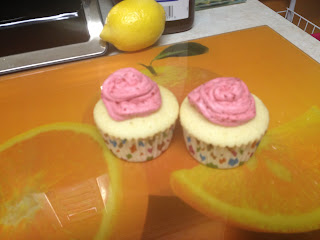