As I was out running errands I decided to stop in at the Honey Baked Ham store and have lunch. I ordered the chicken salad croissant and a side of broccoli slaw. I could have died. Being a non-liker of mayo based anything it is always a not likely that I will try anything with mayo in it. But I happened to remember a friend telling me that you could barely taste it. So I decided to try it and I fell in love! With both!!

So being the kitchen diva that I am, I decided to make my own version. I already had all the ingredients at home (or so I thought) so I said hey why not. I found a recipe on Smitten Kitchen that I thought would work for me. And it did. Except the dressing. So I modified it a little, using a little mayo and plain yogurt. I also didn't put any shallot or red onion in the dressing, but only because I forgot lol. I can't give an exact recipe because I didn't use one. I just wasn't in the mood for buttermilk. I think I just substituted the yogurt in and took the buttermilk out...I think.

Anywho, the slaw was coming along fabulously and I said "OH I need to toast the almonds!" And I found out I only had a finger-full of almonds. Bummer. So I added walnuts-which I had in the pantry. So my salad had walnuts AND almonds! :) My mom loved it as well. 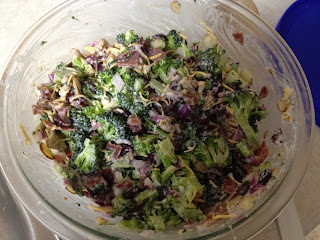 And here is the recipe:

Makes about six cups of slaw

Buttermilk Dressing
1/2 cup buttermilk, well-shaken (I took this out and added plain yogurt)
1/3 cup mayonnaise (this is more than is in the original, to thicken the dressing further)
2 tablespoons cider vinegar
1 tablespoon sugar
3 tablespoons finely chopped shallot (or, you could just use a little extra red onion to simplify it)

Trim broccoli and cut it into large chunks. From here, you can either feed it through your food processor’s slicing blade, use a mandolin to cut it into thin slices, or simply had chop it into smaller pieces. I used the stem and the florets, but if you have a broccoli stem aversion you can just use the tops.

Toss the sliced broccoli with the almonds, cranberries and red onion in a large bowl. Meanwhile, whisk the dressing ingredients in a smaller one, with a good pinch of salt and black pepper. Pour the dressing over the broccoli (if you’ve skipped the stems, you might not want it all; I otherwise found this to be the perfect amount) and toss it well. Season well with salt and pepper to taste.

Should keep up to a week in the fridge.

I hope you enjoy as much as I did!!