March 11, 2011
Some of my favorite people and I have made many traditions.  Most of them involve food and happy hour.  I love my friends!  This week on our list of celebratory events was Fat Tuesday...I won't go into the history, but I will say that New Orleans is a place near and dear to my heart and I will visit every chance I get!

I have many loved ones there who graciously offer me their extra bedroom (or couch or air mattress) that I usually accept.  For anyone who has never been to Mardi Gras, I highly recommend it.  The spirit of the people is so strong that you can't help but to join in the festivities.  I have been twice and had hoped to get back this year, but being broke economic woes prevented it.

As it stands, we usually gather at some restaurant or bar and have drinks and food that are customary to Nawlins.  This year we chose to dine at Carolina Ale House - Harbison (Columbia, SC).  They advertised on their Facebook page that they were having a "party" and to come and enjoy.  So we did.

This is one of my top twenty places to eat because they offer grilled wing varieties so I can be not as much a fat kid as I usually am.  This visit in particular, their daily selections included Gumbo, Jambalaya, Shrimp and Grits and a Catfish dish.  I don't particularly care for catfish, but love all of the other offerings.  So in addition to my wings, eating other people's cheese fries, and Step sending back everything she ordered, I had the gumbo and shrimp and grits.

Both were tasty.  The gumbo was tomato based (which was a little different) but it still was good.  The shrimp and grits had bacon in it so it was almost an automatic winner.  The flavor was good, but they just didn't give enough shrimp (and it had no gravy).  Overall I give it a B+.

Now to get on to what we really enjoyed...the drink specials.  They offered different levels of Hurricanes, which are a drink made popular in the New Orleans region...but I don't really care for them so that's now what I went with.  Every Tuesday they offer half off of their house liquor, wine, and beer.  I chose the house liquor in the form of my favorite~ tequila shot chilled with lime juice~ and Blue Moon beer (something about that orange slice).

Aside from having to nearly show off the tatas almost beg for beads, we had a blast!  Next time I would suggest they have better music though.

Special shout out to the TDs who never let me down!  I love you girls and I'm very happy to have you in my life!!! 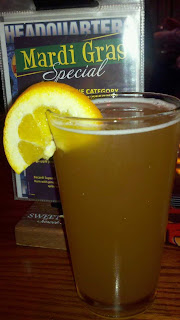 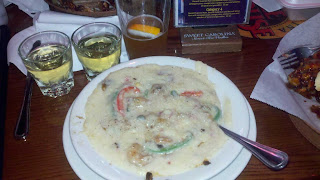 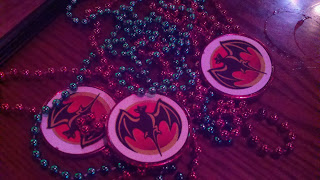 **Please drink responsibly.  This post is not intended to encourage drinking or poor nutritional choices.**